Why the British bulldog spirit is in the genes 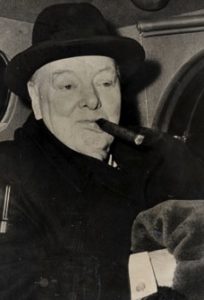 Was Churchill’s bulldog spirit all down to his genes?  When Sir Winston Churchill declared we shall fight them on the beaches, there is no doubt he was speaking from the heart. It would, however, seem he may also have had some help from his DNA.  Scientists believe they have discovered the gene which explains stubborn and bullheaded behaviour.

An estimated one-third of us has the gene mutation which researchers say is nature’s way of ensuring there are always some who ‘shall never surrender’.  The team at the Max Planck Institute for Human Cognitive and Brain Sciences in Germany say such historical greats as Lord Nelson, Sir Winston and suffragette leader Emily Pankhurst probably had it.  “Where would we be without those few individuals who refuse to accept defeat and who continue to soldier onwards when common sense tells the rest of mankind that there’s no use trying?” said Dr Tilmann Klein, one of the authors of the study.

About 30 per cent of the population has the A1 gene mutation, which researchers say, leaves individuals less able to make use of the brain chemical dopamine, which plays a key role in learning.  People with the flawed gene have fewer D2 receptors – cells which help the brain use dopamine – and so find it hard to learn from their mistakes.  This means that rather than accept failure, they will keep trying.  People without the mutant gene will ‘learn’ from their mistakes and stop trying.

The researchers studied a group of 26 men, 12 of whom had the A1 gene mutation for low numbers of D2 receptors.  As part of the study the subjects were shown sets of two symbols on a computer screen, and were asked to select one.  The choice was followed by either a smiling face or a frown flashing on the screen.  The researchers then tested to check whether the men had learned to choose the symbol that was the most positively reinforced and avoid the one that was the most negatively reinforced.

According to the results of the study, published in the journal Science, they found men with fewer D2 receptors had trouble avoiding their mistakes.  Brain imaging then was used to confirm that the region called the “rostral cingulate zone” was involved in learning from mistakes.  This particular region was found to be more active in the volunteers with normal D2 levels during the learning sessions, compared to those with the mutation.  “The fact that nearly 30 percent of the population has this A1 mutation, we can only surmise that A1 must offer some genetic advantages,” said Dr Klein.

Posted on January 9, 2017 by thebritishplumber